I’ve always been a big fan of Lifehacker’s “How I Work” series, especially the earlier ones. But one thing that has been on my wish list is a searchable index of all the “How I Work” interviews as I have no idea which interviews I’m missing, or which are the most popular ones.

So I decided to create one. I first used Screaming Frog SEO Spider to pull out all the links and titles from Lifehacker, tagged How I Work.  This however, omitted all the 2012 and most of the 2013 interviews so I had to manually scrape the site (which I had to do to extract the dates anyway).  I then used my favourite tool Blockspring to add shared count to each URL.

And there you have it!

From January 2012 to March 2016: 164 “How I Work” and 29 “Behind the App” interviews. Searchable by name and sortable by shared count across the various social media channels!

Using another one of my favourite tricks, conditional formatting, I wasn’t surprised to see Tim Ferriss, Guy Kawasaki, Phil Libin popular on Google+, or Lauren McGoodwin (CEO of Career Contessa) popular on LinkedIn. What really surprised me were two major (and I mean MAJOR) outliers in the Facebook shared count data.  If you exclude the two outliers, the average interview would get about 320 Facebook total shares, with a median shared count of ~190. But Ira Glass’s interview was shared over 14,000 times and Alton Brown’s 10,282 times! That’s 6-8 times more than the next most shared interview!

I thought perhaps I made a mistake and checked Buzzsumo but shared count data was right.

I even pinged Lifehacker’s Andy Orin who wasn’t surprised at the data,  he said “The Ira Glass and Alton Brown numbers seem correct to me. (Ira might be a little more famous and the article has been online for a longer amount of time. It’s also just a more interesting interview!)”

So I tried to see if there was any correlation between shared count and date published but nada. 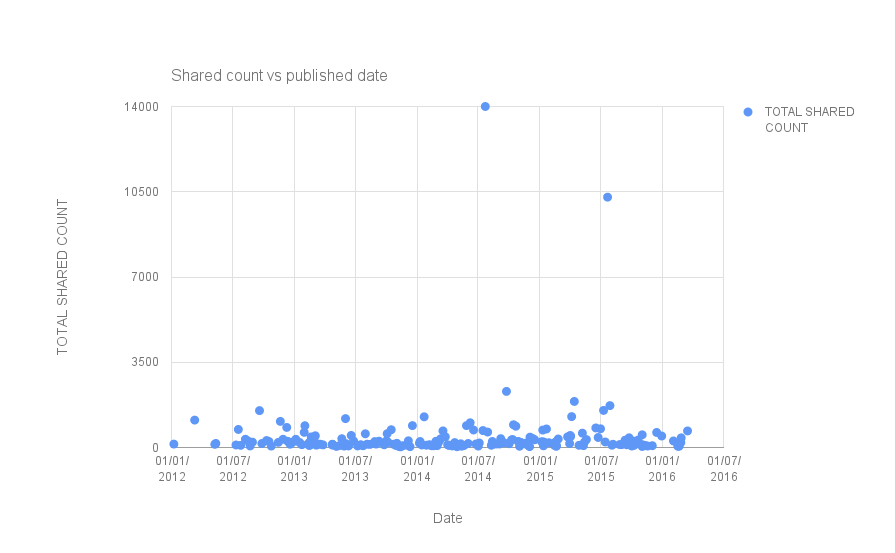 I would love to know if my American friends or other Lifehacker fans are as surprised at this data as I am, or have a view as to why this is the case.

The other interesting outlier is Christopher Jobson who has, by far, the highest number of Pinterest shares (4X higher than the 2nd highest, Ira Glass). I am not familiar with Christopher Jobson but my initial hypothesis was that it could be because “Christopher started Colossal in 2010 to explore the intersection of art, design, and physical craft, specifically artwork that is tactile, physical, and non-digital in nature. Each week, he posts 15 or so of the coolest (seriously, coolest) paintings, installations, animations, buildings, pieces of street art, and more from around the world.” (Source: His Lifehacker Interview)

But then I went to his “How I Work” page and saw this: 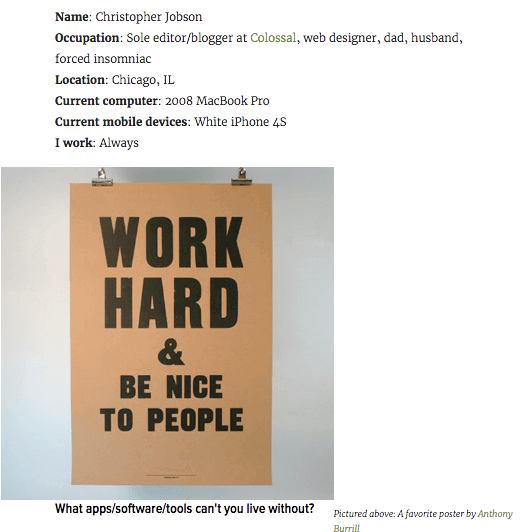 My initial reaction was, that’s cool, let’s pin it, and then I thought, what if people weren’t pinning his page because of his interview but because of his “favourite poster”? (It’s not one of his pieces of work, if it was, it would still be ok)

I am not a Pinterest expert so perhaps Peg Fitzpatrick or Rebekah Radice would care to comment but wouldn’t that throw off pinterest analytics (or be a way for people to “game” pinterest stats”)?

With that, I shall leave you to explore on your own as I have literally hundreds of interviews to catch up on!